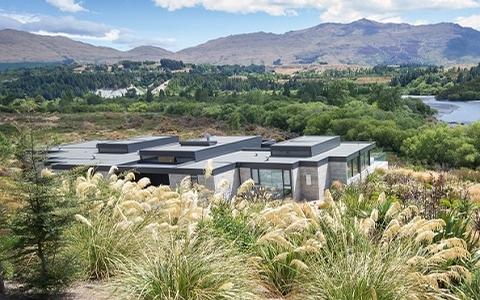 The award-winning company, which works throughout the Wakatipu and Central Otago region, came up ‘top trumps’ with six medals in all six categories in which it was a finalist.

Southern Landmarx directors Joe and Jaye Nutting said they were “truly rapt” with the results.

“The awards are a credit to everyone in our team and the level of quality they’re committed to producing,” said managing director Joe.

“It’s great to work with clients who have such passion and desire to enhance the outdoor areas of their property, and maximise the beauty of the surrounds they live in.

“We wouldn’t be in a position to complete these very special projects or enter the awards without strong support from clients and staff, so both are key to us and our business.”

Held every two years, the LNZ awards are recognised as one of the industry’s most prestigious events.

Collecting the awards on the evening were Mr Nutting and Southern Landmarx Operations Manager Gus Gardiner, who “couldn’t believe their luck”.

Southern Landmarx director Jaye Nutting said the team was “over the moon” with their success.

“We work extremely hard and it’s testament to that hard work that our properties have been recognised as being up there with some of the best in New Zealand!” she said.

“We had fingers and toes crossed for at least one or two awards on the night, but to come home with six from six is better than we could have ever hoped for. It felt like Joe and Gus hardly had the chance to sit on their seats all evening.”

Landscape Consultant and chief judge Penny Cliffin said she “absolutely loved” the Shotover Delta property. “The way that the landscape design was welding into the wider landscape was exemplary”.

About the winning landscape designs:

The company faced the challenge of landscaping the Shotover Delta project from scratch, as the owners had bought a bare section overlooking the river. Looking to build a dream residence in this idyllic setting, the brief was to create a garden that blended native New Zealand planting with a more formal garden in the living areas close to the house.

The clients wanted to be able to grow their own produce and have a dramatic water feature included, in a garden that nestled seamlessly into the stunning natural surroundings.

Challenges for Southern Landmarx included working with a natural gully area which the local authority demanded had to cater for a one-in-100-year-flood. The installation of an aesthetically-pleasing dry river bed met all criteria and linked to a circulating water feature.

Sustainability was achieved right from the time of construction, with the use of local river stone, schist rock and boulders, sourcing plants locally, the design of the reticulating water feature and roof rainwater collection.

The Japanese-influenced lakeside property needed to provide for clients who’d moved to New Zealand after years of living in a small apartment with a vegetable garden in pots on their balcony as their main garden.

With green thumbs and a passion for ‘growing their own’, the brief was for extensive vegetable and herb gardens within easy reach of the kitchen, an orchard of fruit trees in a sunny position and a private Zen garden which could be viewed from the Tatami mat room and bathroom.

A native theme in the outer property was on the wish list, with a Japanese ‘twist’ through rock placement, gravel and pockets of planting. Challenges included the site’s exposure to a strong southerly wind and poor soil structure, and the clients requested uninterrupted views down the south arm of the lake.

For more information about Southern Landmarx, go to www.slx.co.nz