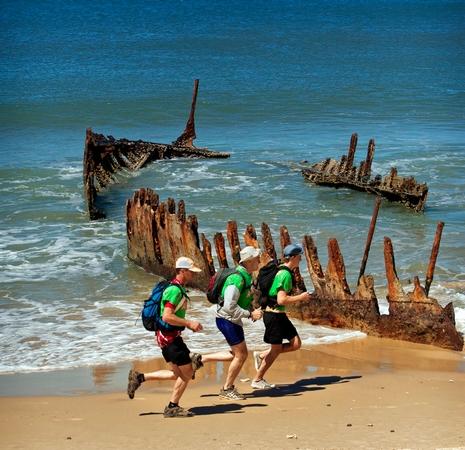 Adventure 1, Australia’s leading adventure racing series has partnered with the company behind GODZone, the worlds largest expedition event, to create a new trans-Tasman adventure racing series.
The joint venture sees Adventure 1 and 100% Pure Racing build on the foundations of the A1 Series in Australia whilst simultaneously launching ‘A1 New Zealand’ for the coming 2017/18 season. The partnership reflects the shared vision of inspiring a new generation of racers whilst connecting grass root participants with the pinnacle expedition adventure event.

Founder and CEO of Adventure 1, Todd Vickery, says the companies share a unified vision of growing the adventure racing community, supporting youth into the sport and creating pathways for a new wave of participants inspired by the outdoors and adventure.

“A1 is excited to join forces with 100% Pure Racing. A new company, A1 Global, has been established and will formalise a long, trans-Tasman history of adventure racing. This partnership provides opportunities for athletes to compete at a unified series of events. It also creates a gateway to new entrants and at the same time incentivises the best teams to win.”

Currently, the A1 Series connects four Australian flagship events under the A1 banner. These races include; X Marathon, Hells Bells, Wildside, and the newly announced Rogue Raid. Points are awarded for each race and determine the years ‘A1 Australia’ champion team.

With the new partnership arrangement, the champion ‘A1 Australia’ team wins a free entry to GODZone - Chapter 7. The coveted prize will bring the Australian A1 champions out to race head to head against leading Kiwi and international teams. GODZone recently sold out a record 100 teams for its Fiordland event, which will be held in March 2018.

“We have a $10 000 prize purse up for grabs at A1 Australia and the addition of a free entry to GODZone will be another major draw card,” says Vickery.

Kiwis will also benefit from the tie up with the creation of a new ‘A1 New Zealand’ series, beginning this year. This will bring together the leading adventure racing events around the country. A1 New Zealand creates a competitive edge to national events and incentivises the victorious, series-winning team, with a free entry to GODZone.

100% Pure Racing will assist A1 Global through significant media exposure, competitor engagement and delivering its proprietary Live Tracking technology to core events. CEO Warren Bates says increasing competitor participation, youth development and expanding online audiences, via tracking, is key.
“The GODZone media platform is large and continues to grow. We also have the best online tracking system in the world and want to roll that out to key events within the A1 Series. Our mission is to connect adventure racing, top to bottom, and help the races in the new series to massively expand their participant numbers and media profile.”

“This is an exciting time for adventure racing. Our team is looking forward to working alongside Todd and welcoming the winning Australian team to GODZone next year. They also have a chance to take the GODZone trophy off the Kiwis and win the newly created $10 000 cash prize for the first internationally ranked team” says Bates.

Growing and improving the adventure racing community for the benefit of all stakeholders and fans is the motivation behind A1 Global. The company is currently in discussions with other countries about the roll out of the series to a wider audience.