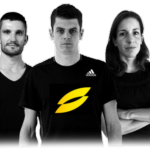 JERSEY (24 September 2017) - A new champion has arisen at Super League Jersey. Kristian Blummenfelt of Norway backed up his win in yesterday’s Triple Mix with the win in today’s Eliminator to score the maximum of 50 points and take the Super League Jersey overall win.

Blummenfelt took out the top spot in five out of six stages this weekend, a product of a year in which he has come into his own. In the previous Super League Triathlon event on Hamilton Island, he made a mark by winning two out of the three Eliminator stages, then went on to capitalize on this aggressive racing by taking three silvers and one bronze on the world circuit, finishing third in the world.

The Eliminator format has three stages of swim-bike-run whittling the field down to the fastest 15 and then 10 to race for victory. The conditions were even wetter than the women’s race held an hour earlier as rain continued to pour down on Jersey. Not only would the fastest survive, but also the ones with the least mishaps.

Stage 1
Jake Birtwhistle and Brownlee were among the first few to exit the 300-meter swim and head out onto the five-kilometer bike leg composed of five laps around a one-kilometer circuit. The wet roads made what was already a highly technical course even more threatening. The optimal spot seemed to be up in front among the athletes with good bike handling skills. Those hanging off the back were more inclined to take risks to bridge back up, with crashes taking athletes like Dmitri Polyanskiy of Russia and Ben Dijkstra of Great Britain out of the running.

Blummenfelt found himself in the front bunch on the two-lap run on the one-kilometer circuit and could not resist taking the Stage 1 top finish ahead of Brownlee and ascendant Aussie Aaron Royle, who finished ahead of compatriots Birtwhistle and Matt Hauser, who got the last pontoon spot into Stage 2.

Stage 2
Hauser’s 15th place finish from the previous stage became a distant memory as he pushed out to the front of the swim with Brownlee on his feet. He was determined to make the final stage unlike on Hamilton Island, when he was eliminated as the 11th finisher in the second stage.
Strong swim-bikers Ben Kanute of the USA and Australia’s Ryan Fisher pushed the bike pace to ensure they could finish the run in the top 10 even with fast runners coming up behind them. While Blummenfelt fell back to as far as 11th on the bike, this was more of an energy-conserving move as he found the front on the run again, this time with Royle in second and Brownlee in third. But finish order within the top 10 would hardly matter, as it was the Stage 3 finish that counted for the win.

Stage 3
Athletes poured out every last ounce of their speed on this final stage of the Eliminator. Aggressive racing would either be rewarded with a win, or a crash out as the rain grew even more insistent. Once again, Hauser led from the swim out onto the bike with Kanute chasing. Brownlee, showing his mastery of these trademark British conditions, sat in third. Murray was on the back foot from the swim and cycled in the back of the bunch. However, with most of the men getting off the bike together, an excellent transition put Murray right back in the race -- for second.

Blummenfelt had gone off the front in the final lap of the bike. Once his running shoes were on, he shot off in what looked like a controlled sprint and never let up. It was all Brownlee could do to keep him in sight, and Murray ran out of road to fight for the runner-up position. Hauser in fourth led the final Aussie contingent, followed by Birtwhistle and Royle.

Brownlee said, “I had a massive advantage there with British weather and British crowds so thank you to everyone for coming out even in this weather. I enjoyed today; I actually think I got fitter from yesterday, but Kristian was far better than us all the whole weekend and I was absolutely nowhere near him today. Well done, and well done to Richard as well. It’s great fun, it’s great racing and hopefully everyone’s enjoyed it.”

Murray responded, “I think Kristian was definitely ahead of both Jonny and myself today as well as yesterday but I gave it everything and the crowd was amazing. The weather didn’t play ball but the guys were safe out there most of the time and we had a great time.”

Blummenfelt said he could not help his gutsy approach to the day’s racing, which has ultimately won for him $18,000 in prize money. “I tried to play a little bit safe in the beginning and just make it inside the top 15 and top 10 but it’s just so hard to hold back when I like racing,” he admitted. “Hopefully I get winter off training now and I’ll be fit for next year.”

With both pro races completed, the Corporate Mix final leaderboard has also been computed. The Corporate Mix overall win relies on the total of a team’s points garnered from their relay finish position and the points from their pro male and female athletes’ finish positions. Team Comprop wins the Corporate Mix with 98 points, boosted by Blummenfelt’s 50 points. First Names Group Team 2 benefited from Katie Zaferes’ 50 points from the twin wins in the Triple Mix and Eliminator, ending up in second with 81 points. The Ravenscroft Titans found themselves in third with 61 points, propped up by their relay team’s great finishes.