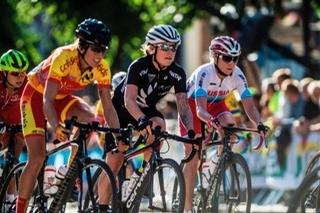 New Zealand rider Linda Villumsen completed a busy and excellent week with a prominent finish in the peloton of the elite women’s race on the penultimate day of the UCI Road Cycling World Championships in Bergen, Norway.

Villumsen finished 21st in the 153km race that featured eight laps of the inner-city course including the climb of Salmon Hill on each circuit.

The Kiwi rider, who returned to the sport mid-year after a lengthy time off the bike following the Rio Olympics, led her professional team to fifth place in the Team Time Trial and was sixth in the individual time trial.

With the help from teammate George Williams, Villumsen bridged up to the lead mid-race but the fast pace and strong attacks from behind change her mind.

“There were only three of us working. I thought we could give it a go and see who would come across to us,” said Villumsen. “When we saw that they were going to come back and we hit the cobbles section, I thought I better now.”

However three powerful performances this week have buoyed Villumsen after her disappointment in Rio which had her questioning her future in the sport.

“It has been a good week but I’m happy it is done. Now is a small rest for me and then build-up again for the Commonwealth Games.”

Villumsen was the 2015 time trial world champion and won the gold medal in that discipline at the Glasgow Commonwealth Games in 2014.

She was also impressed with the efforts of teammate Georgia Williams, the Olympian on the track in Rio, who has completed her rookie professional year with Orica Scott on the women’s World Tour.

Williams provided the wheel for Villumsen to get to the front of the race, before dropping to the chase pack which finished 4:43 behind the winner in 59th place.

“I was feeling good the first four laps but after that was slowly getting cramp and I knew I wouldn’t last the last two laps up the climb. I helped Linda get to the front and hoped she would hang on but it was a hard race,” said Williams.

“I am pretty wrecked. I have had a big season but it was cool and an awesome experience in my first worlds. I put a lot into the year but I’m definitely ready for an off-season.”

Williams has re-signed with Orica Scott for next year and hopes she will have more chances to develop after an impressive rookie season.

The all-powerful Dutch team dominated proceedings with Chantal Blaak recovering from a mid-race crash to solo away for the win, after teammate Annemiek van Vleuten won the time trial.

Earlier the New Zealand pair of Ben Hamilton and Oscar Elworthy finished in the chase pack in the 135km junior men’s road race. The pair, both part of the Barfoot & Thompson Auckland Performance Hub, was with the leading group after three laps. However they could not stay with the attacks on the climb over the final two laps, in their first venture to a world championship.

The championships conclude with the elite men’s road race tomorrow over a monstrous 277kms with 12 laps of the inner city circuit, with New Zealand represented by Jack Bauer, Patrick Bevin and Dion Smith.